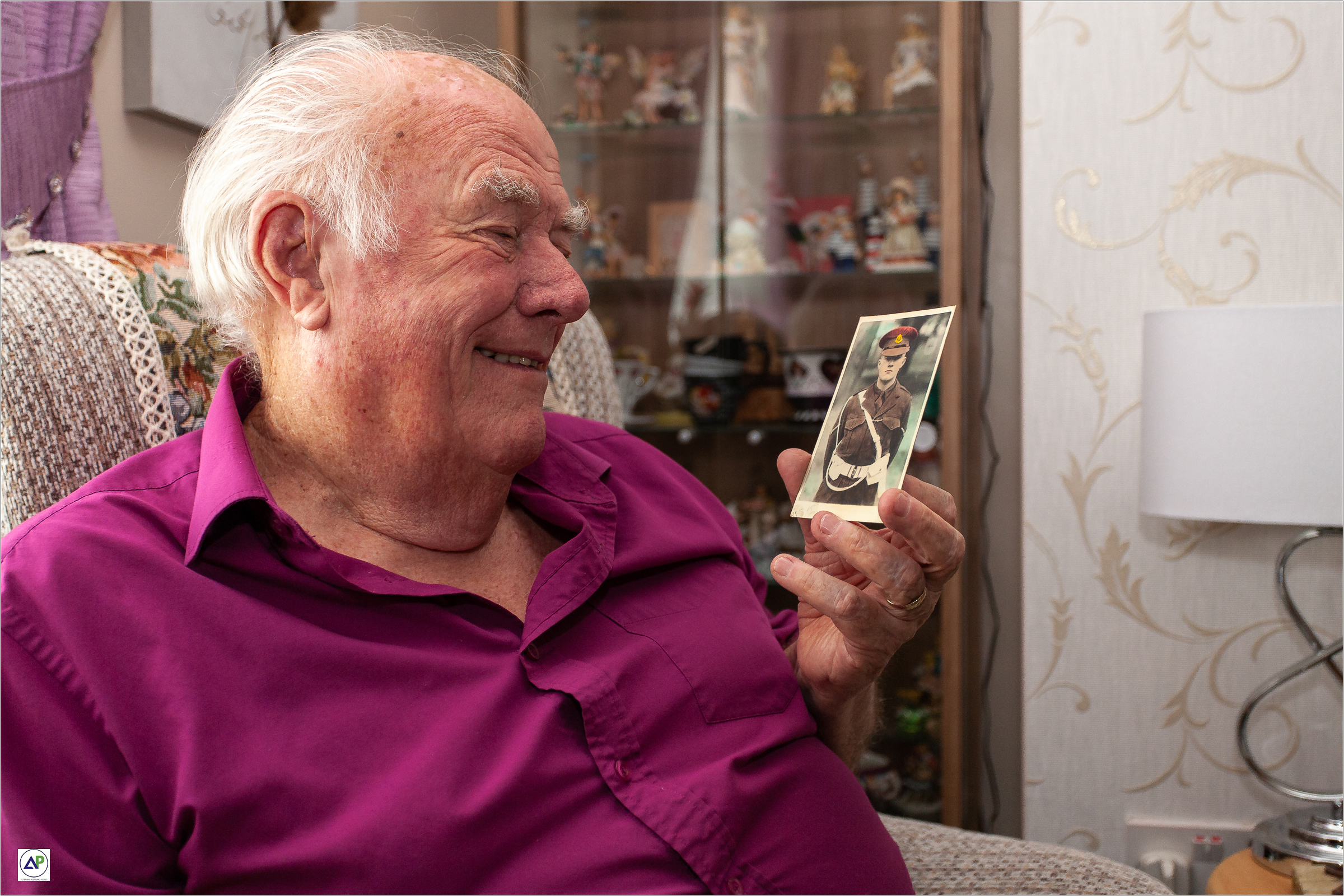 Korea. North and South hardly out of the news these days and maybe one day it will be one Korea again. Maybe. Seventy years ago we had just kissed one war goodbye but another raged in that troubled peninsula only to be replaced by another in another close by a decade later.

The Korean war ran from 1950 to 1953 but the region has been uneasy and dangerous ever since; most of us look back on that conflict as an American one but it was a UN effort, so we were there too and the Australians and the Canadians. And Bill. Soon after.

Bill is 83 now but was just 18 when he found himself heading for Korea in 1953 just at the cessation of open hostilities; a Plymouth lad, his family had largely been Navy types, his father killed in the North Atlantic while Bill dodged the blitz in Plymouth; living right beside the docks was not a clever place to be aged 4 to 10. There was not much of Plymouth left after the war – Bill was lucky. He’d even been evacuated to Chard at one point but only lasted 3 months before him and mum decided to head back to the docks having felt too close to a Bristol air raid one night. Better the devil you know.

Back to Korea. Bill says he knew he could ‘run faster than he could swim’ so a calling to the services led him to the Army rather than the Royal Navy. He signed up when many others were being conscripted and he got £2 a week more than them for doing so.

‘A volunteer is worth two pressed men’ as my mother used to say! Inkerman Barracks, Woking saw Bill enjoy 18 weeks basic training and then 12 more as a signals officer in the Military Police – the ‘red caps’. I reckon he fancied the uniform because he never quite explained what had led him in that direction – indeed he never really came up with big reasons for any direction his life was to take! Happenstance and humour and interesting places at the right time I reckon; he constantly smiles about it all.

The Korean trip was based on an order from his commanding officers one day – would he like to go to a recent war zone thousands of miles away and get two weeks special home leave for doing so. ‘What if I don’t?’ was his natural reply. The answer?

‘well, you get those two weeks in camp…and still go.” Bill pondered the decision – and went! Clever chap Bill.

And there he was in charge of signals (that meant phones really, not semaphore) and acting as a traffic cop, and motorcycle outrider and then barman in the NAAFI as well as pay clerk – the two roles probably related. And all happening together at the same time and no extra pay. He was stationed across the 38th parallel sometimes – nobody seemed to quite know where the line between north and south had been drawn; I bet Kim Jong – un knows precisely these days.

A year and a half of that was followed by three months in Japan – ‘policing things’, as ever Bill was less than clear and less than serious about his time policing the Japanese. And was even less clear about the 18 months that followed in Singapore. We’re in the mid – fifties here and there were still Malayan terrorists at every turn. In fact everywhere Bill went was still ‘dodgy’ shall we say – still nasty rumblings going on in hostile territory. No picnic.

“Did you get any home leave?” I asked. ‘No, none’. But after three long years Bill was back – to Colchester barracks this time. Chaps getting ready, indeed conscripted, for Suez. Funny how we all have 1945 as the end of the action but rumblings went on and on and Bill heard many of those rumblings. Seven years of it and seven years of turning his hand to almost anything and being popular doing it. Until that was that; the seven years he’d signed up for had elapsed – time to hang up the prized red cap and forget all that. A modest pension, a heavily stamped passport and a host of memories; actually there was no passport – they didn’t need them back then.

Bill returned to ‘The County’ of Plymouth as it was known back then and turned his hand to the council’s ‘scrap and surplus’ department plundering demolition sites for reusable RSJs and the like; and Plymouth was pretty much one big demolition site in the late 50s and early 60s.

And after three years of that he became a warehouse manager for Walpamur in Truro; now even I can remember that name – sort of back before Homebase and B&Q and suchlike. The birth of our British DIY ways. Worked 5 days a week 9 ‘til 5 which drifted to 7 days a week 8 ‘til 11…until one day he just collapsed. And, no, the pay didn’t rise to match the hours. He left and was unemployed for a troubled three months throughout which he still did the St John’s ambulance work he’d always signed up for. In fact he got promoted and promoted and promoted with them. Always liked a uniform Bill.

The next job was as a cleaner at City Hospital which many Cornish people remember with affection; I do, they operated on my left arm in 1969 and I’ve still got the scars to prove it. But I think Bill and I never crossed as he was only made a ‘plastering technician’ in 1992 moving to Treliske in 2000 as a Senior Plasterer Technician.

Back in the day everything broken was plastered by chaps like Bill; I was on a number of occasions. The result was a big white lump of what felt and weighed like rock; something to be signed and scribbled on by all your mates and rather scarily sliced off with a whizzing saw when the time came. Your life in bill’s hands. Not the same nowadays – all lightweight arm casts and plastic boots now. Not the same at all,

Bill lost his first wife and married again 30 years ago having shared his son’s 21st birthday cake on a celebratory trip to Malta with a lady he’d met at the birthday ‘do’ he’d arranged and booked. And that brave lady, with obviously a monster sense of humour became happy wife number two and shares the flat owned an run by Sunley Orford in Truro where they’ve been for 7 years now. They liked the look of the place while visiting a daughter in law; they were down from Scarborough (I never asked!) ten years ago, put their names down and now here they are very comfortably slap dab in the middle of Truro – flat easy walking distance to everywhere.

And he’s writing a book – his book, because they keep bullying him into telling the same stories so he’s committing them to paper – 150 pages so far. ‘Half way’ I suggested. No he replied ‘about a third I reckon’.

Interview by Dave Meneer May 2018. Photographs by Peter Blyth