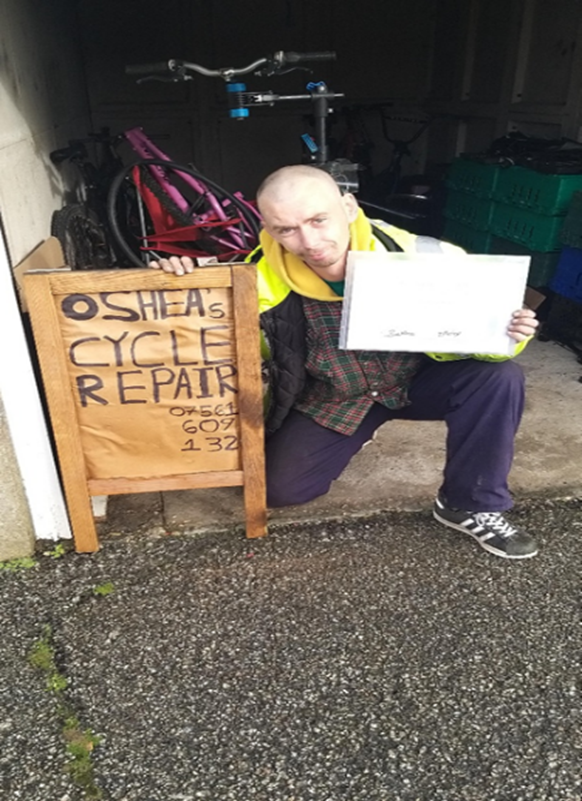 Craig was homeless in Manchester a few years ago and things were not good. He decided to move down to Cornwall to get away from the drink and drug scene and make a positive change to his life. He lived in a tent outside of the main town in Truro for some time and soon made friends with the locals who he chatted to as they passed to go to Tesco to do their shopping. When lockdown happened in March 2020, he was invited to go into one of the Cornwall Council ‘PODS’- portacabins made into one bedroomed self-contained units in Truro. At first, he wasn’t sure as he had tried to live inside before and it hadn’t worked. As life became more difficult during lockdown, he decided he would give it a go and found that he really enjoyed living as part of the community that had grown up in the PODS.

In August 2020 he was given a flat by the Council and began to enjoy his new found comfort of being inside. He decided that he wanted to set up a bike repair business and so he was introduced to Active Plus by his support worker at the PODS to see if we could help.

The Change Coach Manager researched bike maintenance courses and found one locally that was still taking on participants during the Covid-19 pandemic.

“I contacted Life Recycle who run a bike maintenance course in Camborne as Craig had no official bike maintenance qualifications or tools. Life Recycle are donated second-hand bikes from a local bike shop who take them as part exchange for new bikes. Life recycle teach bike maintenance courses using these bikes and the participants learn how to re-build them from scratch, and then they can keep the finished article. Craig had no tools to start a business and so we bought him a starter kit and a bike stand through the Positive People programme to help get him started. We also paid his train fares to attend the 4-week course and he was delighted when he gained his certificate…he was so excited to show the Change Coach Manager his certificate at the garage he had set up at his home”

During his course she introduced him to the Veteran Specialist Change Coach, Marc at Active Plus as Craig had been in the Territorial Army many years ago. He discussed his ideas for a poster and logo with him. He had already made himself a street sign for advertising out of an old bill-board and had designed a logo and poster for his company but had no laptop now to access them. We gave him an Active Plus ‘stick’ and he went to the local library to access his information. Marc approached a local printing company and explained Craig’s journey. The Company decided they would like to help by donating the cost of printing some leaflets and a poster for Craig and he is over the moon with. “I sourced a free shelving unit for Craig so that he could put his tools on it in his garage as he was using old food crates stacked up.

I discussed next steps with Craig, and we discussed his English and Maths skills and what he would need to help him set the business up properly. Craig had gained some functional skills whilst in prison some years before but felt he needed to brush up on his skills and go to the next level”

The Change Coach manager made appointments for him to have assessments with the local Link into Learning and he has now started his Level 1 Maths qualification and aims to do his English afterwards.

Craig has also been referred to the School of Social Entrepreneurs Springboard project to discuss his self-employment ideas and to see if they can assist him going forward.

Positive People is part of the Building Better Opportunities programme and is led by Seetec PLUSS. The project is funded by The National Lottery Community Fund and European Social Fund